Yesterday I was having a few problems with Windows - every so often it would freeze for like 30 seconds, after-which everything would come back and resume. It seem to get worse the more data I transfer on my main HDD (the WD black drive). It looked like there could be a problem with either the HDD, power settings or a DVD-Rom drive (I started noticing ATAPI errors in my system log).

Things got pretty bad at one stage - Windows freezing quite often. The best way to describle it is by showing you the result from HD Tach (a HDD benchmarking tool):

Normally the chart should start high, and taper off by curving. However to see this graph going all over the place wasnt right! It looked like the HDD was ... Read more

I am really worrying about google sometimes... why I hear you say. Well I was checking the spelling and term (to make sure I had the correct word) of the word prepare when google suggested the following:

:lol not what I had in-mind! gesshhh google! ... Read more

A ton a junk a day

I dont know if its just me, however im finding a lot of emails in my junk folder everyday now. Last time I checked I had 159 junk emails - which was only empted a few days ago. I know sometimes good emails get in the junk folder, however I dont really have time to sort through so many emails each day.

Probably in 5 minutes ill probably have another 5 junk emails.

Am I the only one getting so much junk? ... Read more

That noise drives me up the wall... from either waking you up, or walking down the street all you hear sometimes is *beep *beep. I dont know who's idea it was, but putting beepers onto workmen vehicles was a bad idea. Maybe its just me, but dont you ever get fed up hearing that noise? Rarely a day go pass without hearing the dreaded *beep *beep...

Heyo to everyone reading this

Lately, I got tons of stuff to do. it's a hell for me at the moment, school is going into final rounds of tests, project deadlines are closing with FTL (faster then light), and I'm tired.
Nonetheless I started work on a TShip editor for X3 Reunion and possibly X3 Terran Conflict.
While all info I need has been provided by Roguey, I still found some issues with it. For starters there is anything from 63 to 295 entries for a single ship. Many are Turret and Front Gun points and definitions, and while this isn't a big deal per se, it kinda destroyed my illusion of it being a simple parsing program.
I'm kinda known by now for over-engineering things, but most of the time, somehow the ... Read more

*coughs and curses* damn I lost my script.... here goes nothing!

I have recently started Roguey's forum again, i spent a lot of time off, when I was not playing on the X games.
I have re-started the campaign again, but cause I was board I scripted a Federation Defiant Class into my game, M2 class, with 4x10GJ shields

I could not be bothered having a challenge.... and I did put in on X-treame mode... but then again I see no difference between that and normal.

I have now gone off X2 and X3TC and can't wait for XR to come out it shall be good.

Nothing much more to say, I have added a 'Story time 2' post in which an ongoing story is made... it shall be fun. So far we have Argon ... Read more

Ok, this seems to be my first blog entry. Well hello to everyone who reads this, and without bothering you too much, this is what's going to be happening around here: I'm going to ramble about anything I feel about.
Sounds good doesn't it?

A couple of things I want to tell everyone, first off, If you like anything I create, please drop by and say hello.
Seondly if you DON'T like something, or would change something, drop by, say hello, explain what and why you would change it. Maybe I'll feel the same way, or maybe I'll make a special version for that.
Thirdly, I will NOT bother scripting for TC. I haven't played it, and unless it gets ported to linux I probably won't. For this matter I cannot ... Read more

Ive been playing X-Tension for a few hours now and found out the fastest way of making money in X-Tension is by capturing Pirate Orinoco's (M3). Each one is worth around half a million! You wont find such easy money is that. 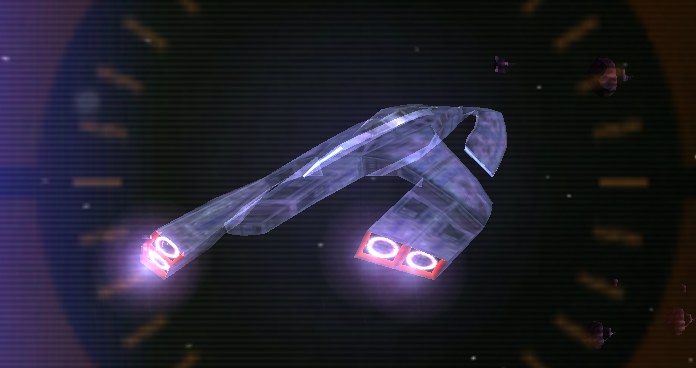 Sometimes they will never bail, so dont spend 2 hours trying to capture one Orinoco. I hope that helps!

You may even find the bailed ship contains a ... Read more