During the past few weeks, Frontier have been pretty quiet about the future of Elite Dangerous. This has left many commanders feeling rather underwhelmed, as many big updates fail to offer any improvements to the core of the game. Things such as exploration, mining, smuggling, etc. have seen very little improvements. The big patches have been aimed at adding new features, rather than improving the existing ones. I guess Frontier are trying to attract more new players? 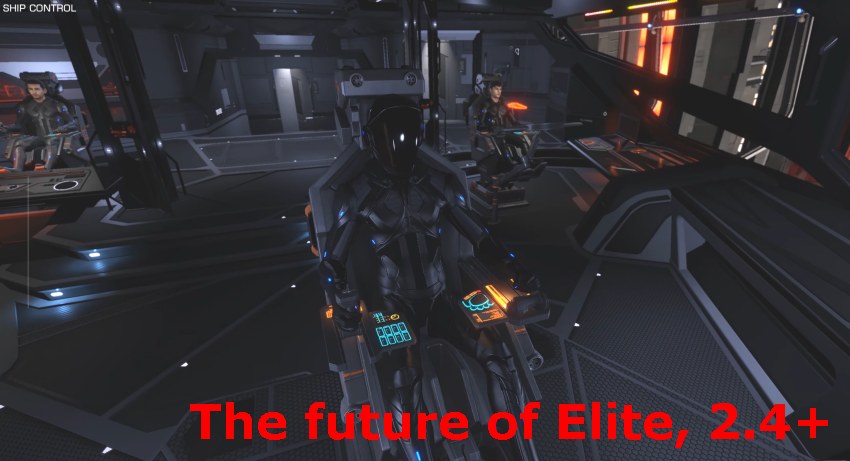 ObsidianAnt (one of Elite's most famous commanders out-there) posted a video about this, as he seem rather disappointed (you can see thee video here). A day ago Frontier have released some news about 2.4;

Back at EGX in 2015 we showcased the headline features that would be coming to Horizons. However, there’s always been an extra little update, a mystery if you will, that has yet to be revealed.

We’ll be providing a little more information about the update to the community and the press during E3 on June 13th and 14th. We’ll be hosting special community livestreams and activity so stay tuned for more news and updates as we get closer to the date.

I can, however, tell you that this update will be slightly different to previous ones - content will be revealed over time rather than all being available on day one. Additional pieces of exciting content will surface over the coming months as the narrative progresses.


So a date has been set when we should know more about 2.4. At the moment Frontier are working on getting the PS4 version released, which should see more commanders taking to the skies. The post also talks about after 2.4 too;

So with the Horizon season of expansions coming to a close, what is beyond 2.4 I hear you ask? Well, it certainly isn’t the end of this amazing journey... we're only just getting started!

Our awesome dev team are dedicated to continuing to build and improve the Elite Dangerous experience with an exciting long term vision in mind. We're happy to be able to confirm that the next major updates following 2.4 will focus on core gameplay, existing features, quality of life and other improvements! We're delighted to be investing a considerable amount of development and effort into making the core gameplay experience even better for our fantastic community or players.

We'll be sharing more news on that content and our roadmap at a very special event coming later in the year - more details on this event will be released in the weeks after E3.

On behalf of the entire Elite Dangerous team, thank you for your continued support. We are very excited to embark on the next part of the journey together as we continue to make Elite Dangerous an even more fantastic game and experience for our incredible community of players.


The full forum post can be seen here. Could this see the introduction of season 3?

How do you feel about the direction of Elite? have you been some-what disappointed in some of the updates - if so, which? do welcome the news of future updates to the core gameplay? would you keen seeing a season 3? let me know below in the comments or the poll below;