Recently Frontier's David Braben posted an development Update on the future of Odyssey. It reads as follows; 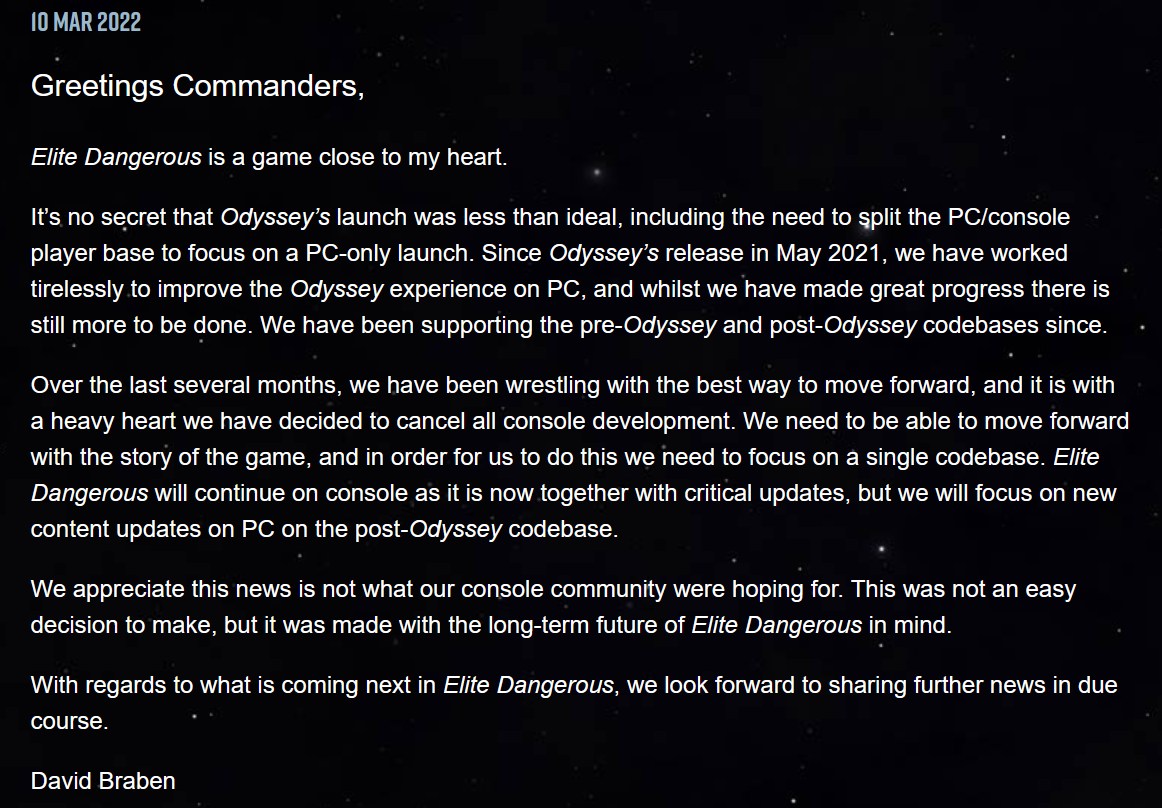 So in the first section, he admits Odyssey was in a bad place on release (something we all probably knew). At first we were told Odyssey wouldnt be fixed until the console version was released (PC players were left with an unfinished addon). This decision was later revoked, as Frontier decided to continuously patch Odyssey on PC. Odyssey is still not in a great place but is a lot better than its first release.

So now Frontier have admitted the console version of Odyssey has been cancel alltogether. So im guessing they had too many problems getting Odyssey to work on console. Frontier is a company who chases the money, evident by its in-game store, eagerness to delay pc updates and porting the game to the console in the first place. Im guessing the consoles (with thier limited resources) couldnt run the game successfully (PC has more resources and can overcome poor optimization by brute-force).

The second part of the update says Frontier will not be updating the original base-game or Horizons any-more (Both PC and console). Instead they will be focusing on a single code-base: Odyssey. That would suggest nothing major will be introduced into the game now. New content such as ships may not come? For a ship to be added both the base-game and Odyssey would need to be updated to incorporate them - as they are common thing in both versions of the game (code would need updating). So new content will be only for Odyssey now; guessing such as ground-combat, guns etc. - maybe im wrong?

So that begs the question; if Frontier are pulling resources away from Elite, does that mean Elite is reaching its end of life (EOL)? Does that mean the space-part of the game is staying as is?

⇊ Load more comments ⇊
All names, logos, images and trademarks are the property of their respective owners. Website created, designed and coded by Roguey © 2019. Privacy policy.
This page loaded in 0.00052 seconds. If you like to help, please consider making donation.