Learned one thing or two..
-collecting cargo is illegal
-being fugitive make most people hunt you
-wrecking your ship means loosing much money(depending on equipment)
-insurance.. are somehow importent, but expensive
-dont hit the wrong button if your ship was destroyed (NO free Sidewinder!!)
-keep some spare money in case of ship destruction
-obey the system forces
-never forget to ask for landing clearance..
-never get away from the computer even if you have to pee..
-never leave your ship flying long distances without being in front of your controls
-never collect drifting cargo if it is not worth enough
-drifting cargo is marked *stolen* and can only be sold at blackmarkets at HALF the price
-a printed list of cargo prices let you quick take the best and left the worst behind
-never spend your time writing blogs. Get off and play E:D!

Second try
One day I could not play E:D anymore because.. there were an update -.-
So I decided to delete my Commander and start again with CLEAN police report.
Found Rogueys fantastic E:D-Universe and got even less time to play.
Because now I was going to explore and add unknown systems to this site Big grin
Those blog made me forget how dangerous E:D can be and so I crashed inside a station(during START!!)
I decided my police report was to bad too, so I deleted Commander once again

Third try (JAN,29th 2015)
Eek.. Every *new* start means stupid start sequence..
Little money and LHS 3447 crowded with other pilots, laaag time -.-
Fixed lasers..I must keep the targets where those lasers can hit them,..

Explored unknown signal sources:
-2 "trade plans"
-fight against an ASP: hello? I got only a sidewinder!
-6 house thing devices, err.. only 2 spare cargo??
-1 *bad* cobra.. yields 7894CR +2428CR "cargo" ^^
-4 rebel transmissions. 12265CR for deliver 2 of them for a contract +2708CR for 2 more
-a funeral transport, worthless..
-a technology trader..
-7 really old artifacts.. and i got only space for 4 of them Cry
-5 chemical waste -.-
-wedding barqe
-a bad ASP Smile For me and my sidewinder it was an EPIC battle.
.Okay, I cheated because I pulled her in front of a federal dropship Hammer

Do the possibility to find precious cargo decrease with increasing cargo bay space / largers hull size?
Ever found 12t of Geawen Dance Dust(12t) drifting lonely in space and your sidewinder got only space for four of them?!


Forth try (Feb,2nd 2015)
Got completely dependent from this E:D/universe section of Rogueys site..
And when this site were not accessible I had to go and find alternatives.
Because I need a place to put all the data in Eek
Searching the net yields some alternatives, but no one of them pleased me.

The sad downtime of Rogues E:D-Universe led me to a very crappy piece of software:
EDDiscovery2 (is thought to be used for calculating distances between stars):
-grabs your wherabouts from the E:D Logfiles(if verbose logging is enabled) and put it into a database
- contacts an EDDS server to download known star systems and their positions.
- calculate the positions of any system using known distances.. (no more GUESSING a position?) 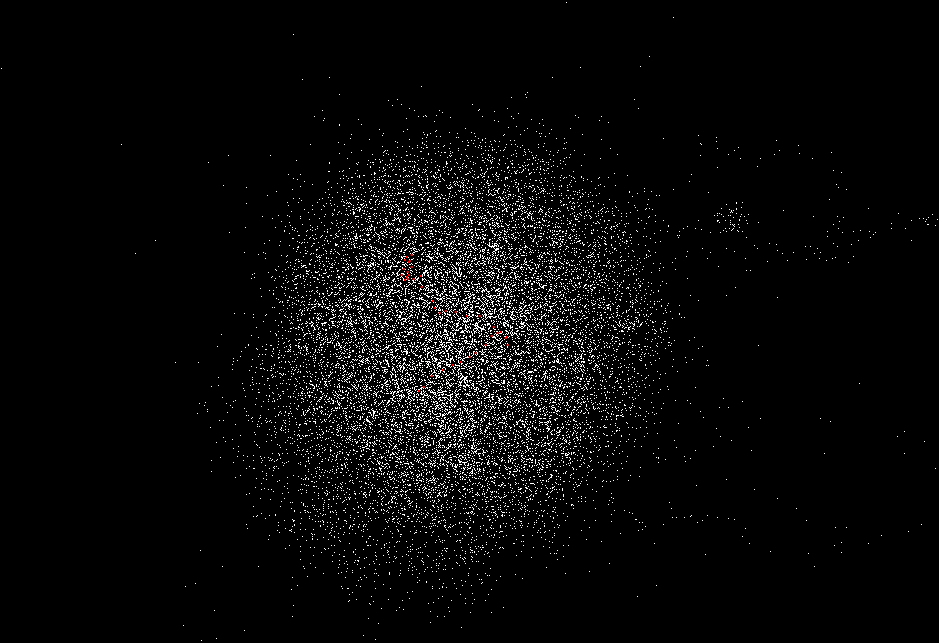 - contains an *ugly* map where visited stars are shown in red
- add short data to a system. Really SHORT data.
I dont need those much stuff, my intention is using this program as.. travel diary LOL

Shot down by a federal drop ship while I was hunting another *bad* ASP -.-
First those stupid officers ran between my target and my weapons and were angry.
Must be some friend of those who take me "accidently" down in one blow..

Fifth try (Feb,3rd 2015)
Plenty of explored system data LOST. Being unhappy I got angry right from the next start: 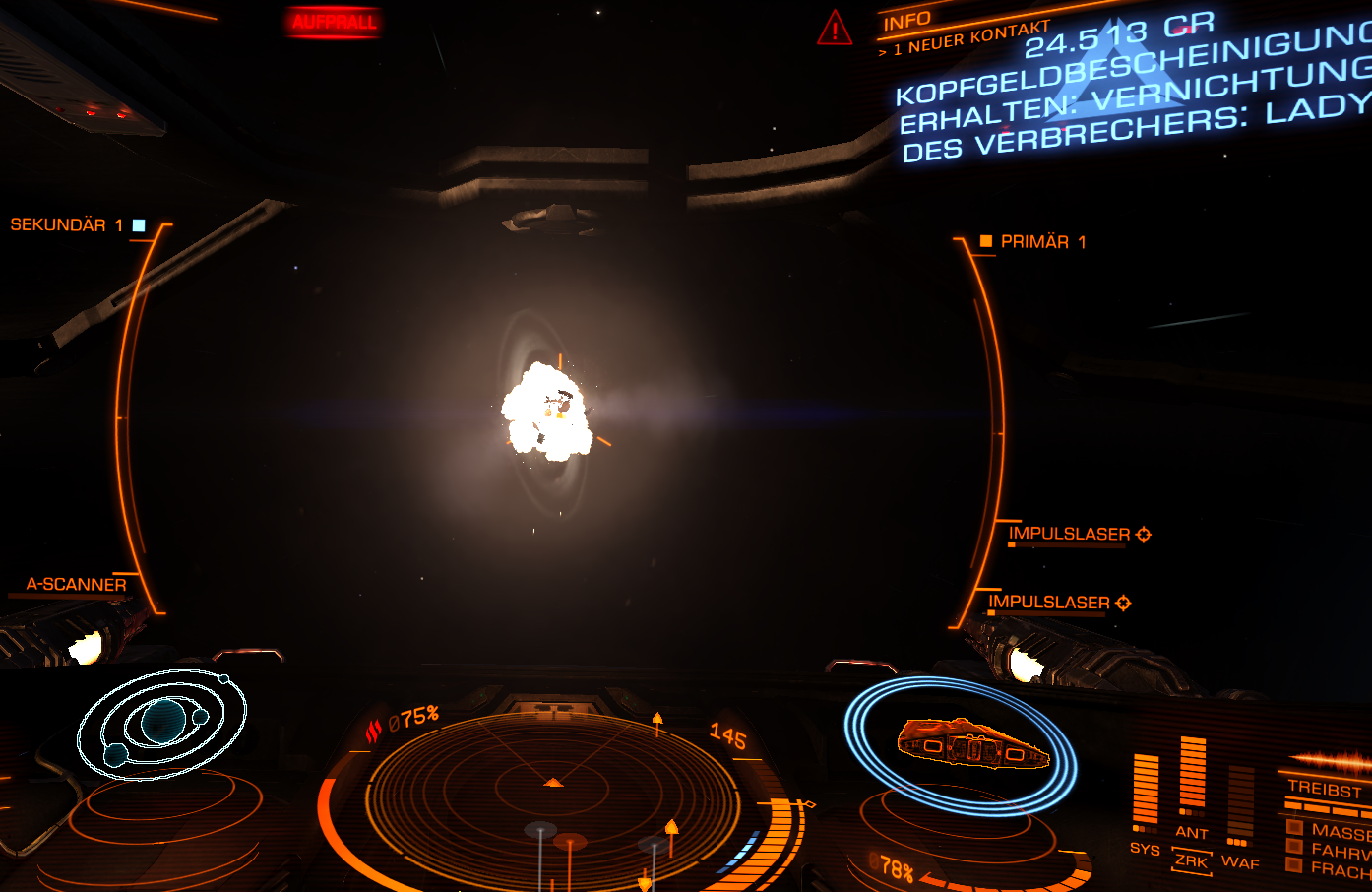 Believe me it WAS an ASP Big grin and YES I did it using the "loaned" default lasers.
I took 3 screenshots, one prior to "proof" its an ASP(or did i hit F12 the first time? -.-) but there were only two SS showing the explosion. Maybe if someone hit F10 to fast it overwrites the first?
Hint: Set one button to 50% speed.. helps turning around those ASPs ^^

I am finished -.- (February, 5th 2015)
The game hates me! Sad
Finished a mission(hunted 5 pirates in FED space).
Those system was FULL of pirates Wink so I decided to cross the system over and over again for additional pirates. Got over 100.000CR for them.
Got back to a station to get paid.
Though it would be great to keep this system-crossing for more pirates..
And a damn system force viper vessel got between my weapons and my target (again -.-)
Retreated to station, requested clearance to land, got it.. was in the doorway heading into that station. Was scanned.. was hit, was dead!
For what? A penalty of 400CR for hitting a stupid officer??
Paid 17.000CR for keeping the outfittings.
Thank god the next update should fix this..

Okay, no more restarts. I have to hurry as the latest patch includes the information that some guys out there already reached ELITE in combat.. Eek

Decided those rare "warez" may be fun but I dont like them.
Stranded suddenly in space with little fuel supply and.. any stars around me were nondescripted.
Few stars in reach - I MUST find some which can be fuel-scooped.

Asked wikipedia about the nearest star "Pollux". Hurray, it is a g-class star Nod

Got a Cobra, cargo hold full of rares.. crashed during start into the station -.-
No cargo insurance???
Update 1.1?

Did i accidently put game-difficulty to insane?
Why do Imperial Clippers haunt me(and Anaconda with ELITE ranking)?
Is it malfunction of a copy protection?
Or did this happened because it was FRIDAY, 13th..? Bash the wall

Apr, 6th 2015
Have not had enough time I stopped playing E:D for two months.. the hunt for triple ELITE status ended as well and now I am back for business..

Two month may be a short time for the most of you but for me.. I hardly remembered how to get to the nav panel LOL

Again there were lots of updates so the display looked slightly strange to me.
Bounty hunting yields lots of credits.. before I was happy to get ~25.000 CR and now it is around 125.000CR. Sweet Smile

New equipment has been added(hull reinforcement packs), sad to see how the jump-range decrease..

[colour=#ff0000]Dont try to ram vessels or even.. nav points[/color]
Really today my ship was destroyed.. by a damn nav satellite thing Go nuts 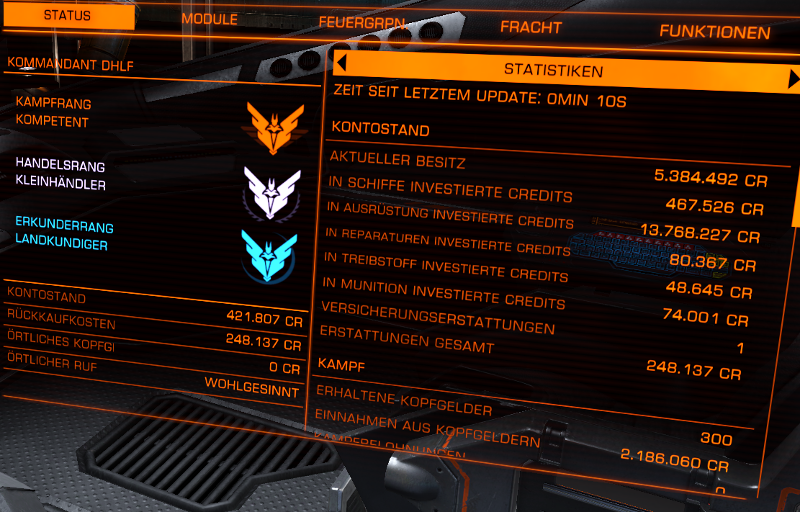 ⇊ Load more comments ⇊
All names, logos, images and trademarks are the property of their respective owners. Website created, designed and coded by Roguey © 2019. Privacy policy.
This page loaded in 0.00126 seconds. If you like to help, please consider making donation.