The Terran Commander has definitely been a hard start: no plot mission, war all around, no Terran police license and such large sectors making travel very long winded (trade is near impossible). I managed to get some money together by salvaging stuff then went exploring. I noticed the Terran Springblossom (M6) has got a crazy top speed, so I headed out looking were its sold... Aldrin. So I ditched the Katana (which has just 1 extra shield) and brought one (at 6.5mil its a great buy, with top speed of 360m/s!).

This new ship allowed me to travel across those hostile sectors where Argon ships jump in and start shooting at you. Once I got away from those Terran and Argon sectors I could find some friendly sectors. This is were I started making real money because of the fight missions.

After a few missions I headed on over to Cardinals Domain. I shot down an Argon ship there, then thought the local police would go hostile... nope.. nothing. hmmm.. has my paranid rank gone up?... I shot another down.. yup! The Paranid actually like me for killing Argons?!? This makes Cardinals Domain for me a great place to capture M3/4/5's.. there is even a shipyard there to sell the ships!

After awhile the money started building up, so I starting getting marines and training them. I didnt get them far when I noticed a small wing of ships supporting a single Heavy Centaur.. I thought what the heck?.. lets try boarding it...

Oh.. that thing puts out of lot of damage... my Springblossom just managed to hold the damage whilst I sent out the marines out and hold down the shields... "We on target.. stand-by"... 6 marines with just 2 stars have got no chance!.. "Deck 1 clear.. moving to deck 2"... hmm... "Deck 2 clear, smoke in the hole".. now this getting interesting... the Heavy Centaur is an 15million credit ship!

A few moments later, "transferring ship to your command".. oh!.. did I really get that ship with just 6 bad marines?.. oh 4 have been killed (ah screw them they were bad marines anyway)... still, oooh: 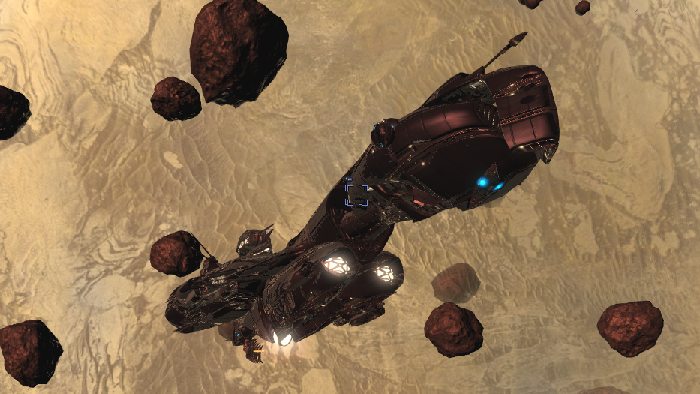 Now ill be arming up my new ship to capture and board more ships... The best way to look at the Terran start is that your a Pirate attacking the Argon... OOohh Arrr!