During the past few weeks I have been trying to get a SNES/Genesis (Megadrive in the UK) emulator for my smartphone (a HTC Wildfire S). This is when I came across SuperGNES (A SNES emulator for Android). I got it off the Market, and then copied some Roms over to my SD-Card (by plugging my phone into the PC). A few moments later, my old SNES games appeared.. And they are actually running quite well too – which I was really surprised.

So, I start the game and try to use the touch panel controller. Well, it wasn't too well, sometimes the button wouldn't register (in a game like F-Zero this could end your race, if you don't turn correctly). I couldn't even control Bomberman too well either, most of the time I blew myself up! So I started to look for a controller for my HTC.

Well first thing was to look around the house. I had some PC controllers, PS3 and a WiiMote. Well the PC controls didn't work. I got some USB adaptors, but my phone doesn't have USB Host (or USB OTG): meaning the phone isn't good enough to become like a PC (just acts a peripheral). I found out that If the phone was running Android v3+ then I could do it (MY HTC is running v2.3.3).

The next try was the PS3 controller, after-all it's a Bluetooth device (and some have it working). I tried a trail app from the market, yet I got a problem with the driver. A driver or something couldn't load on my phone, so that was the end of that.

My next controller (or thing to test) was the Wii Remote: another Bluetooth device. This time the phone saw it and tried to pair. This is when the phone asks for a PassKey (which I didn't know). I tried 0000, 1111, etc. nothing.. I even tried to press space, delete and then okay. Nothing.. I tried a few more apps to get the Wii Remote working (like Bluez IME), yet nothing: the darn thing wouldn't pair. Apparently there is a problem with the Bluetooth in HTC phones which won't let you pair with the Wii Remote (something about a stack?).

I was starting to give up hope, when I come across a device called Gametel. This little device is Bluetooth controller: aimed at Android, iPhone and iPad. After all the problems I had, I wondered if it would work. So I contacted Gametel support: A guy called Andreas replied and said he just tested it with a HTC Wildfire and it works fine!.. although you may need to update the firmware to v1.3. Well a few days later this turns up: 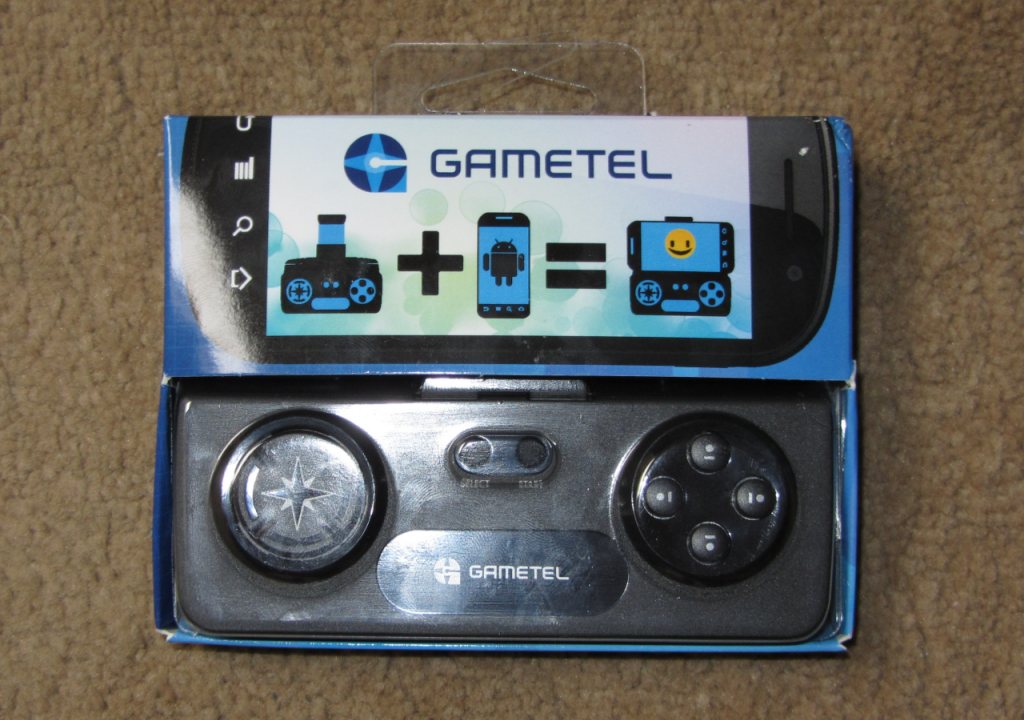 First thing to do is to update the firmware: this was fairly easy to do.. The pad had v1.0 to start with.

I can confirm that the Gametel does work fine with a HTC Wildfire S! I looked for ages to see if my phone would work, couldn't find anything on the net.

So, now I have a gamepad for Smartphone – which is tons better! In F-Zero I couldn't even finish the first race without blowing up or losing positions (with the touch controls). Now with the Gametel I completed the course and easy got to 1st place!