Elite Dangerous » A bit further in

As you may of seen, ive spending a bit of time playing Elite: Dangerous Beta 1.03. At-first it was a bit confusing (like most games), although Beta's games are often even more confusing as there can be a lack of documentation, things missing etc. I think now I have gotten the grips of things.

When you start in your Sidewinder you wonder what to do; so I started to explore, fight and test things - it doesnt matter if you destroy it, as you get another free one. Although being in the weakest ship does mean you have hard start (top-heavy).

For awhile, I wrestled with the controls - changing between keyboard, mouse and gamepad until I found something which works for me. I thought my controls were bad when I struggled to hit anything with my C2 pulse lasers. I later learned that fixed weapons are by default hard to use, but offer more damage than automatic-aim guns. So now ive settled for the gamepad with the keyboard for short-cuts.

At the moment the primary goal is to make money, or credits. These credits can be used to buy better weaponry, trade with more expensive wares or to upgrade ships. Whilst the current line-up of ship isnt that big at the moment, each ship feels like it has a purpose. 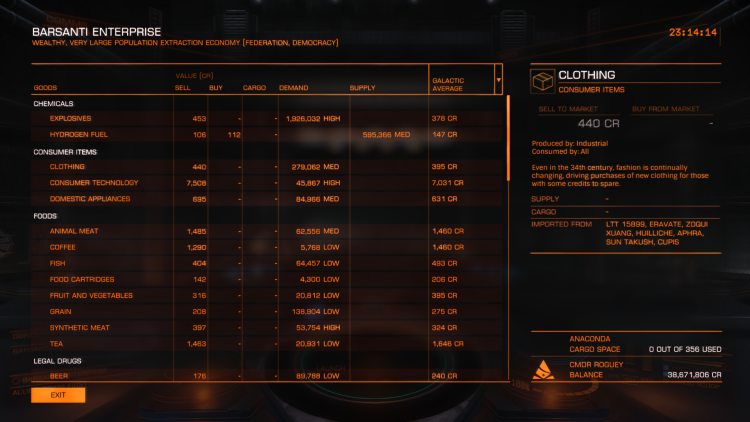 I recently upgrade to a Hauler, thinking it wasnt going to be a big upgrade, but I was wrong. The extra cargo-bay makes a huge difference to my trading. The 4 units in the Sidewinder seems very small now.


One thing I like with fighting is that if you start to attack friendly ships, you end up with a bounty. The higher the bounty, the higher chance of getting shot down, either from NPC's or other players. So it doesnt really pay to attack other players, unless they been hostile to others.

For the past few days ive more or less stayed away from combat. The reason is that I feel my C2- weapons arent all that good. I find that I miss most of the time with non-gimbal weapons, and C1 gimbal pulse laser is a bit weak. I feel I will return to fighting once ive upgraded my ship a few times, probably when I get a Cobra MKIII.

The online mode is good, but I do feel at the moment its not used to its full protential. Sure its good to see other people around and that but I feel the communications panel needs a major overhaul (hard to see text and unable to talk to someone when they go out of your area). I would also like to see group events (like GW2 style where people can just wonder into them) and guilds. Maybe these feature are already planned?

I must admit its nice seeing a bulletin board again, when it was removed from the x-series I felt it removed some of the immersion from the game. Sure, its quicker to get your mission from 7km's away but why bother to land? 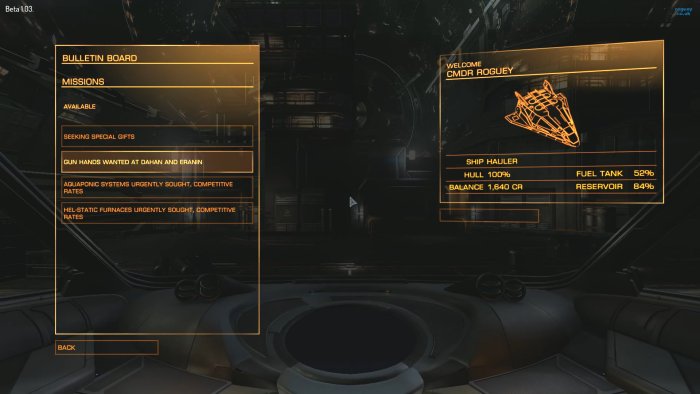 This brings me onto my next point; landing. At the moment 90-99% of the landing is manual. Whilst it may not sound too bad, landing at the start of the game is a relatively complex task until you get used to it. I did buy a docking computer later on, but after it drove straight into another player's Anaconda, I removed it and continued to do it manually (I had 9% hull left after the ram).

Which brings me onto my worse point so far; grinding. It would be unfair to think any open-ended space space-sim wouldnt have any grinding. However at times it does feel at times you are simply flying backwards and forth just to transport wares. I know there are other things to do than trading, but I dont feel they offer as much credits. Without the credits you will be stuck inside the Sidewinder for a very long time - working up 100,000cr will take you a very long time otherwise.

⇊ Load more comments ⇊
All names, logos, images and trademarks are the property of their respective owners. Website created, designed and coded by Roguey © 2019. Privacy policy.
This page loaded in 0.00136 seconds. If you like to help, please consider making donation.