A little after my last post I found mention of a luxury run called - Tenche. On face-value it didn't look like it would offer much, but after trying a test run with my Asp seem to be a fast way to make money. The run invoiced picking up performance-enhancers (from the nearby station), then selling them at a nearby point. Whilst the profit wasn't ground breaking, it meant you could sell them very quickly. So it was time to sell the Asp, for a Type 7. I knew this run would be removed by Frontier (because it was the fastest way to make money), so made the most I could from it. It even allowed me to switch from a Python to a Type 9 in the same day. I was a bit stupid with the Type 9, as for a little bit of time I had no insurance on it, and since havnt repeat. However as quickly as the run was found, Frontier put a stop to it. I can't moan because I did very well from it – gaining an Anaconda with 10 million!

So, with the run over it was time to think what to do next. The Anaconda I had brought was only barely operation (after picking up wares for sale), or I could sell it and buy a pretty much upgraded Python (I only got to fly one for a day or so). I was hearing there would be a Python nerf. So after much thinking I decided to stick with the Anaconda (I wouldn't need to worry about the rebalance, and I may not be in the same situation again). However one thing was clear, I need to find a way to make money. The Anaconda was quick to eat money, but equally should be able to make a lot of money too. The 10 million meant it only take one smash up for me to be put in serious financial trouble. So I thought if I lose the ship once, then I would switch to a Python – I wasn't going to let my efforts disappear (I was silly enough before with the Type 9, not again).

So the only way I could make money was by trading, nothing else really scaled. I originally wanted to make money with combat but it only took a little bit of hull damage to dash any profit made. So this is when I started working my trade-helper more - I needed help with trading too. I found trade route around Brani (I can't remember the exact route now) that I used to build up my money. Once I had enough money, I started to feel some-what safer. One of the stations there has giant arms on it. Somehow I knew I was going fly into it sooner or later, and I did (although when I had enough money).

After more money, it was time to upgrade the ship. The first thing being the jump-range – for me the most important thing whilst trading.. well, part from cargo space of course. Later on I installed a better Power Coupler, which set me back 27 million! Geez, this Anaconda was costing me a lot of money.

After a lot more trading, it was time to get the ship armed – this was one of the main things for me, a ship with similar cargo-space as a type 9 but with weapons. During field-tests I decided to look around Lave to see how bad things were. I know there were a lot of pirates up there, so I figured it would be a good test place. This is when I ran to a griefer, who decided to send me personal attack through my site. This was reported to Frontier, which later said they couldn't do anything, and urge me not to combat-log again (this guy threaten me saying Frontier were going to act on me). I wasn't proud of combat-logging as I never did it before. Its an issue that Frontier need to fix, and something I havnt done for long time. After all this cleared, I was wiser and decided to go back to trading. I still feel this should have never escalate outside of the game, but equally I shouldnt of replied.

I decided to give the game a break for a bit – I knew wings was due soon, so thought things could be worse with these pirates but actually seemed to encourage coop play – something I felt was missing from the initial release. Suddenly now I was joining random people helping them bounty hunt and trade.

However every time I opened up my status screen, I kept seeing Aimless under the explorer rank. So I decided (after upgrading the Anaconda) to try my hand at it. The Anaconda wasn't the best ship for the job but it allowed me to test exploring. My first thoughts its nice get your name in the map but it doesn't pay well. So I decided to keep grinding the money, to get Asp for the job. On my second exploration run (my largest so far), I made only a couple of million. This took me around 5-6 hours!

Just today ive re-reached the 100 million mark, with a 230+ million Anaconda and a 25 million worth Asp. The next goal is trying to reach Dangerous – it's crazy to think people have already hit triple Elite! To this day ive only lost the Anaconda once because of that giant arm. 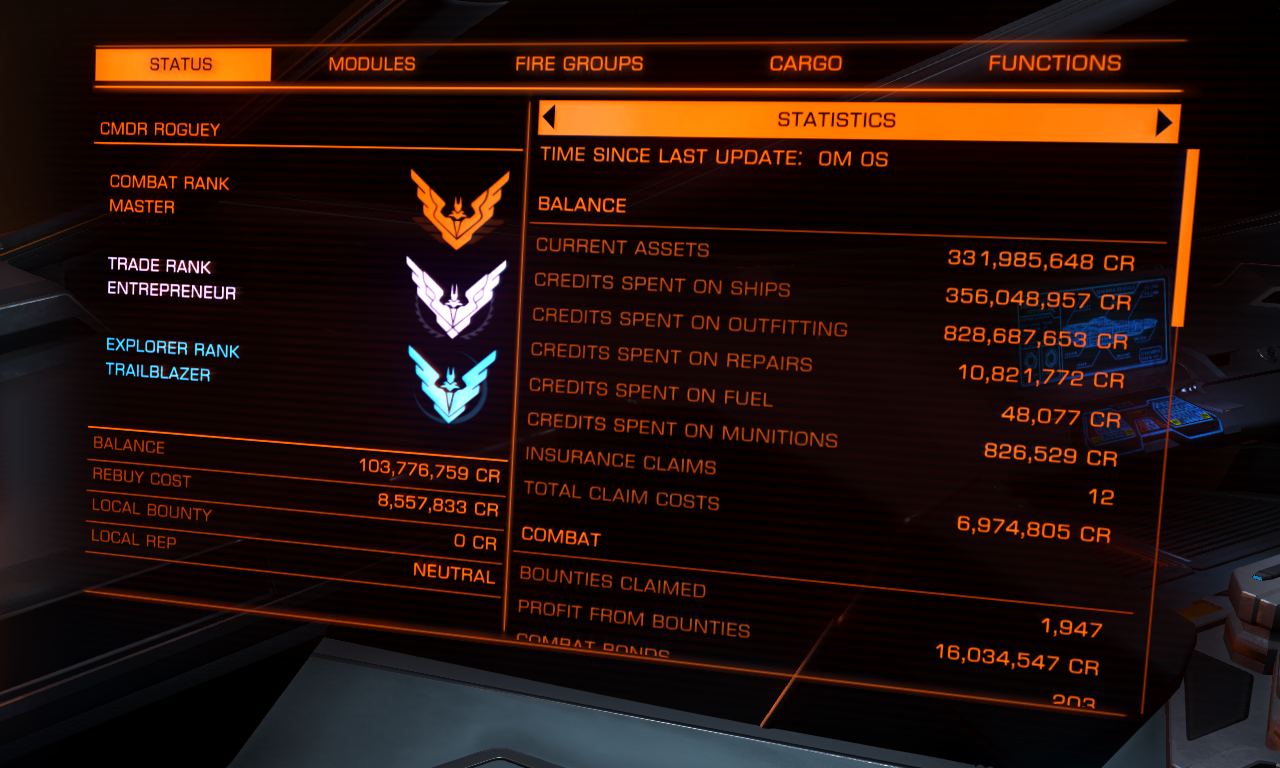 Hopefully it won't be so long before the next blog..

All names, logos, images and trademarks are the property of their respective owners. Website created, designed and coded by Roguey © 2019. Privacy policy.
This page loaded in 0.00132 seconds. If you like to help, please consider making donation.