I will be adding screen shots to my forum page for them, so you lot can see what it is like. If you have any think you want me to take a look at feel free to ask on a forum page.

I am looking forward to playing AB, just hoping my system can handle it.

Something that really annoys me is the fact that I have a 50mb/s fiber optic broadband and I am just cracking 5.5mb/s d'load and it had a peak of 6.1mb/s.

Currently I am on 48% and it is only just making 4.8mb/s big drop.... so I am annoyed. I suppose a lot of people d'load from the Steam servers.

There is manual available online... I will see if i can get the link ... Read more

Today (whilst my internet is working), ive been checking to see what activity has been happening on the sites. Here's a little round-up of the site activity.

In general there is a reduction of X3/TC visitors (I guess people are finishing the game and moving onto new things/waiting for Rebirth). Glitches in the game I guess haven't helped.

The hits on the Rebirth site have dropped also (to between 15-30) - however with very little new Rebirth news I can understand why. Ego have introduced a lot of changes, yet very little news - just a few odd forum posts on the official boards. Even from months ago we still only have a few odd pictures/videos.

The forum is doing okay, although its seeing around half the amount of viewers ... Read more

I have started looking for various things involving the X games that are worthy for the news feed. I will post them from time to time so please take a look. These will mainly involve updates and other major things such as the recent one of the X Wiki shutting down. So please feel free to look at them

I have now become re-addicted to X3TC I am currently going around blowing people up in my Taladi Shrike, I had just completed a mission killing someone, it gave me 5million credits, I was happy as I could finally buy another M3 fighter for my docking bay... I know have enough wing-men to keep me happy. I was just about to jump out of Paranid Prime when a bloody ... Read more

Since discovering a flaw in X3TC, ive gone a little nuts making PPC's, then putting them on Orca's for sale. Money is no longer a problem: 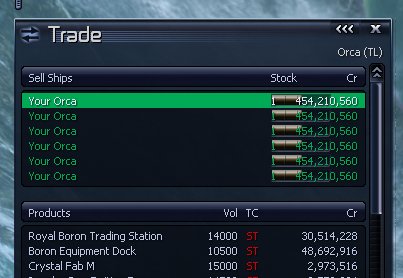 The worse bit is that my game is still unmodified - I guess because the flaw is in X3TC then technically its not cheating, nor modding the game: as basically the game has a flaw. If you want to see the flaw, check here.

Oh, btw im going to kill everyone in the X-Universe when my armada gets big enough. I already have 8 Borea's getting ready

I was floating around Terran space when I noticed the Terran TL - Atmospheric Lifter. It has no guns but 80,000 cargo size, 20k more than the next biggest the Argon Mammoth! This would be great for complex building.

At first I tried to chase after one in my Split Cobra, however the Terran TL has a slightly higher top speed - I couldnt keep up. I noticed the ship travels to the planet (around 450km from the first location), disappears, then a few moments later reappears at around 110km - heading towards the USC Orbital Supply Base.

So the Terran TL starts from 100km'ish away from the USC Orbital Supply Base, then travels to the base, stops, sends out drones, then flies to the planet (450km) then ... Read more

X3TC » The joining of complexes

When you start building your own complex, if like me you keep adding more and more stations until it becomes a messy or so busy its hard to find a place where to add another station.

There is a 20-25km limit of where you can place station away from a HUB, however there is a way to extend your complex even further by joining complexes together.

For example, you make complex 1 have all your mines, then make complex 2 with all your food/bio resources and so on. Then you can link all the complex together to form one giant complex. The only rule for joining complex hubs is that they need to be within 20-25km of each other.

Using this information I have extended my complex to reach nearly across a whole sector:

Once you got the shields down, send 1 boarding pod (with 5 marines). If you send any more marines, they wont attack and will eject into space. After sending the Boarding pod -it might be worth sending just a few more Flails to stop the ... Read more

So, I changed my race relationship to hostile to the Argons, then started to fire Hammer Heavy's at the ship - so to bring down the shield and make the ship go hostile. As soon as the ship went hostile, I used the jump-drive and moved the nearest gate. Seeing as I had a Split Cobra (which is faster than the Boreas), I turned the ... Read more